Purnima is ensuring vulnerable older people are receiving the support they are entitled to during the COVID-19 pandemic.

Dhanmaya is 87 years old and lives in rural Gorkha. Traditionally older people would be cared for by their families, but following the 2015 earthquake, many younger people moved to the cities or overseas in search of work, leaving their elderly relatives like Dhanmaya alone and struggling to cope.

The Government of Nepal provides an identity card to the most vulnerable people so that they can access a Social Security Allowance and subsidised government services. However, like many older people in Nepal, Dhanmaya’s name had not been recorded in official records, so she did not know how to claim her card. With the outbreak of the COVID-19 pandemic, Dhanmaya became increasingly worried about being able to afford food and medicine.

Through Purnima’s Leave No One Behind component, community groups help share vital information about what government support is available to their most vulnerable members, including single women, elderly people and people with disabilities. As the frontline staff know their communities well, they were able to easily identify Dhanmaya and confirm to officials that she was eligible for the identity card. They helped her apply for her card and now she receives 3,000 Nepalese rupees (£20) a month so she can buy medicine, food and other basic items. 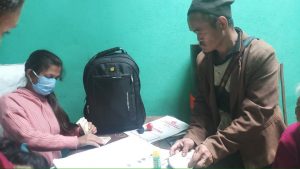 Purnima helped five more elderly people in Dhanmaya’s municipality obtain identity cards so that they could receive their allowance. It has also helped those whose payments had stopped, despite them being eligible, such as 76-year-old Aash Bahadur.

Dhanmaya is relieved that she does not have to worry about having enough food to eat during such a difficult time “I do not know what I would do for living without these allowances during the pandemic and lockdown,” she says.

This vital support is implemented by PHASE Nepal through the UK aid-funded Purnima programme which is managed by Mott MacDonald.